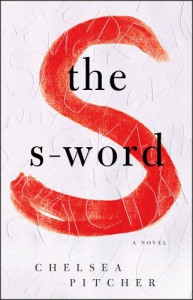 Even though my rating doesn't really show it, THE S-WORD is a book that I really enjoyed. It's not perfect, as my rating shows, but it's very enjoyable. I would love to give THE S-WORD a full 4 star rating or even a nice shiny five star rating but I can't because it's my job as a reviewer to look deeper into a book. I've given plenty of books an initial 5 star rating and then dropped it to 4 or 3 (once I dropped a rating from 5 to 1 star) after I thought about it.

The beginning of the book was addicting and all around amazing. If I just counted that part of the book, this would be a 5 star read. No doubts about it, the beginning to around 50% is a sure 5 star read. After that 50% mark however, the book started slipping. I began to skim a bit here and there and forget important details. I still enjoyed the book but I felt that I sort of had to push myself just to get to the next chapter.

It became a chore to finish the book I had loved so much before.

This lasted till the last 20% but then I found a whole new problem. One that didn't go away after a few pages. It was called "predictability". In the last 20% all the big surprises were unveiled but I guessed every single one of them. It was so disappointing and sort of ruined the ending for me, causing me to deduct another star.

Characters
Angie had a lot of similarities to other main characters in books such as Sam from the heartbreaking and wonderful Before I Fall by Lauren Oliver and Chelsea Knot from the beautiful Speechless by Hannah Harrington. She was the bad girl, that high school bitch who rules the school. She was despicable like these girls started off as.

However, she didn't have such an impact on me as Chelsea or Sam did. Angie was just not a character who really resonated within me like Sam did. I only really felt something at the end where I almost cried. It was just so utterly heart breaking. The only thing I could think after I finished was:

If you don't know me, I'm not exactly an emotional person. I'm what people call "heartless" and "unfeeling" (mostly when I tell them I didn't cry while/after/before reading THE FAULT IN OUR STARS). I get really unexpected feels when reading some books though. This was one.

In case any one wants to know why I cried, here it is.

The other characters were, for the most part, interesting. I did enjoy many of them but for some, I just found them less then satisfactory. I can't really name any but there are some characters that I just didn't feel anything for.

Plot and Writing
Plot
As I stated above, this isn't exactly the hardest book to guess the plot. In fact, someone who is really bad at guessing plots for most books was able to guess the plot of the entire book. The plot wasn't bad really but the best part was really the ending.

Not the part where all the surprises are revealed but the last 10%. That really just destroyed me. It was wonderfully done and I applaud Pitcher. Fantastic work there. It was honestly... beautiful. It reminded me of the ending of BEFORE I FALL. It wasn’t nearly as heartbreaking and utterly devastating but depressing all the same.

Writing
The writing wasn't exactly THE S-WORD's strong suit. As reviewer Emily May said in her review said quite well:

Some of the similes didn't sit quite right with me, one example is this "'Give it a rest,' I say casually, like I'm asking which celebrity they're most itching to bang." I found this particular comparison odd, shouldn't you say something along the lines of "like I'm talking about the weather" when you're being all casual, banging celebrities isn't exactly what pops into my head when I'm thinking of casual things but maybe I'm just more boring than I realized. Another thing that felt so unnatural I almost laughed was "It wasn't nice of her to sleep with my boyfriend", I mean, who actually says things like that? Who here could walk in on their partner and best friend getting it on and think oh my, that's not very nice, is it? But look, I have a broken nail.

Another point that I didn't like about the writing was the sense of detachment. I didn't really care what was going on during the middle of the book. That detracted from the overall reading experience greatly even though I only felt detached for around 30%.

In conclusion
I really wish I could have loved this as much as other reviewers and readers did but sadly, it didn't really live up to all my expectations. I still recommend it whole-heartedly but THE S-WORD is not a perfect book but it's still a very enjoyable one.